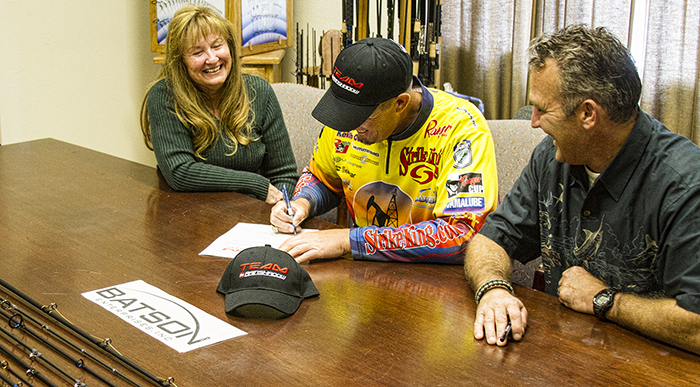 “It’s been an amazing year at Batson Enterprises,” says Bill Batson, Head/Team RainShadow and CEO, “adding another, professional elite angler and quality person, such as Keith Combs to our Team RainSahdow takes this year over the top for 2014.”

Keith Combs, home base of Texas, has been fishing on the B.A.S.S. Master Elite Tournament Series since 2011. A major highlight in 2014, Keith won the Toyota Texas Bass Classic with a record breaking 110 total pounds, making this his 3rd Toyota Bass Master Classic championship in the past 4 years.

“I am extremely excited to be working with Batson Enterprises team. Utilizing RainShadow rod blanks, ALPS and ForeCast components will elevate my fishing. Their team brings a wealth of knowledge and experience to the table. It is always a pleasure partnering with people who share the same passion for fishing and the outdoors as I do.” says Keith Combs.

Keith will begin fishing his exclusive RainShadow series branded rod blanks with ALPS/ForeCast components in 2015. Partnering with Power Tackle, these signature series Keith Combs rods will be available through various online and retail locations in the near future.

“Fishing the Bass Master Elites, I am always looking for a competitive edge, and choosing the right products for your fishing rod is definitely an edge. During the last few months of testing RainShadow Rod Blanks and ALPS/ForeCast components, I have learned there is always room for improvement when it comes to my rods. These will give me the edge to win” Says Keith Combs, “I look forward to outfitting my complete line with RainShadow rod blanks and ALPS/ForeCast components during the 2015 B.A.S.S Elites tour and the 2015 Bass Masters Classic. I believe there designs will elevate my performance and offer an unbelievable product for the consumer.”

Power Tackle Fishing Rods along with RainShadow, ALPS and ForeCast look to release a line of Keith Combs Signature series rods to the consumer. This will allow the consumer to fish with the same rods that Keith Combs fishes with.